The War on Police Endangers Every Community

Deadly ambushes on officers a symptom of the degradation of authority that will end with tragedy.

What we see in the streets of America is a war on the police, representing an assault on the fundamental fibers of authority that knit a country together. As the symbol of authority, law enforcement is tasked with carrying out the protection of citizens guaranteed by their elected officials. So, when the police are ambushed, it is a clear signal that those in government authorized to “insure domestic tranquility” are failing.

“We live in a time where there is a true lack of respect for authority. We see it in homes as children are disrespectful and disobedient to parental authority. We see it in public as criminals have no respect for the authority of law enforcement figures,” observed Emmett Murphy, a columnist for The Daily Advance. Furthermore, statistical data show a growing number of murders of law enforcement officers. “The National Fraternal Order of Police on [Jan. 3, 2022] released a report showing 63 officers were gunned down while on the job in 2021, up from 47 in 2020, 50 in 2019, and 53 in 2018,” Emily Zantow outlined in The Washington Times.

Attacks on Police Trending Up

The trend continues. As of Sept. 27, 49 police officers have been killed through “felonious acts,” averaging 5.4 per month. “The 10 ambush attacks in 2022 are a 100% increase compared to the 5 ambush attacks in the same time period in 2021,” the FBI reported. “I have worked in law enforcement for 36 years, and the current level of violence targeted at our law enforcement officers is the worst I have ever seen,” lamented National Fraternal Order of Police President Patrick Yoes in a public statement.

Supporting Yoes’ assessment, after a fake 911 call, a Connecticut man ambushed and gunned down two police officers and wounded a third before being shot dead by the injured officer. The Connecticut Office of the Inspector General released body-cam footage of the incident, showing a harrowing gunfight with “well over 80 rounds fired” by the gunman reminiscent of troops in combat in Iraq or Afghanistan.

That attack on officers performing their duty to answer a call for help is just a recent example of a spate of violence that is having severe consequences. Being in the crosshairs of armed criminals and suffering ceaseless media assaults are having deleterious effects on the men and women in blue. Local communities cannot ignore such impacts on the psychological well-being of officers and their families.

Attacks on Police Have Consequences 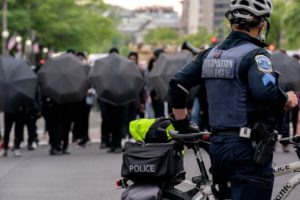 In San Antonio, TX, 30-year-old police officer Jordan Hammond committed suicide, and his was the fifth in the department in the last seven months. “The demonization of police by the media and politicians has played a significant role in crushing law enforcement morale nationwide,” Tania Glenn, a therapist who specializes in mental health assistance for first responders, told Fox News Digital.

“Police departments across the country are struggling to retain officers and hire new recruits. A lot of them blame it on how the public views law enforcement,” Madison Scarpino explained in a Fox News report. The defund-the-police movement and the failure of legislators to pass effective police reform measures are having an impact on recruitment. Even generous hiring bonuses have not helped.

When respect for authority breaks down, the country is on a slippery slope to the dissolution of civic institutions that ensure stability. Halting daily systemic political and media muggings of law enforcement should be imperative. Or citizens will wake to find those who stood firm “to serve and protect” are gone.