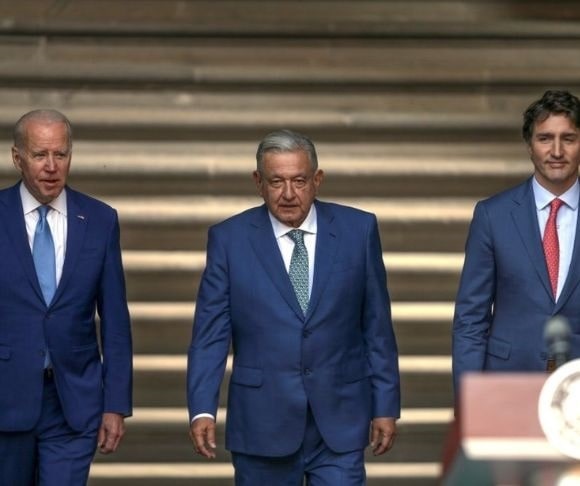 Lost amid the revelations of classified documents stored next to his Corvette and whatever gaffe he might have just uttered is that a sitting U.S. president has once again openly espoused trans-nationalism while abroad.

“There can no longer be any question, none, in today’s interconnected world. We cannot wall ourselves off from shared problems,” President Joe Biden declared Jan. 10 at the North American Leaders’ Summit in Mexico City. While that remark may appear to be somewhat benign, keep in mind that it came at an event where Biden’s counterpart, Mexican President Andrés Manuel López Obrador, publicly thanked him for refusing to build “one meter” of border wall to protect the U.S. from the ongoing invasion of foreign “migrants” at the expense of the rights, privileges and standing of American citizens.

Canadian Prime Minister Justin Trudeau rounded out the “Three Amigos” who gathered in Mexico for an annual conference ostensibly dedicated to developing a healthy working relationship among North American neighbors. Yet the unmistakable message these representatives of supposedly sovereign countries chose to articulate was wholly dedicated to the blurring of national identities.

Transcending to a North America Union? Terms such as “transcendence” and “combined ecosystem” were deliberately bandied about, while notions of individual nations acting in their self-interest were deplored via abrasive epithets like “hegemonic.” The vague, elastic labels “democracy” and “diversity” were haphazardly sprinkled into the mix with the knowledge that they can always be fitted to serve the cause of post-nationalism.

“We have said this and I repeat it today – I insist on this: You, President Biden, you are the first President of the United States in a very long time that has not built… even one meter of wall. And that – we thank you for that, sir, although some might not like it,” Obrador gushed.

This quote was widely reported. What the Mexican leader said next was not.

“I’ve asked President Biden to insist before the U.S. Congress to regularize the migration situations of millions of Mexicans who have been in the States working, living in the United States, and contributing to the development of that great nation,” Obrador continued. A foreign leader is declaring that the United States must change its immigration laws at the expense of its citizenry. And, rather than sternly rebuke him, an American president nodded his head in agreement.

Obrador stressed the labor angle in those remarks because he fully understands the power of multinational economic forces to erode the protected borders he finds so distasteful. He specifically cited the “business community” as a key plank in bringing about “that transcendence of being united in North America” and “this unity in everything we do throughout the American continent.” Trudeau grasped this too, repeatedly hailing the now-discarded North American Free Trade Agreement that did so much to undercut workers in the U.S. and Mexico. Cheap American corn flooding into Mexico due to NAFTA is now regarded as a leading trigger of the “migrant” crisis overrunning U.S. borders today.

“Mexican corn farmers were no longer able to make a sustainable living due to the plummeting demand for their produce and accordingly migrated from rural farms to urban centers in search of employment,” an informative 2010 report by Rick Relinger published at Prospect, the Journal of International Affairs, states.

This urbanization process directly fueled the mass exodus to the U.S. that has caused the current humanitarian crisis on the southern border. Yet here were the Three Amigos in Mexico City praising the very policies that created the catastrophe they now claim to be committed to solving.

The trio issued a “Declaration of North America” that further promoted the cycle of trans-nationalism. The first four “pillars” all are familiar hallmarks of the three-decades argument for globalism and the erasure of individual national identity:

Americans are called to stop draping themselves in the red, white and blue and embrace a “North America” heritage:

“North America shares a unique history and culture that emphasizes innovation, equitable development, and mutually beneficial trade to create inclusive economic opportunities for the benefit of our people. We are not just neighbors and partners. Our people share bonds of family and friendship and value – above all else – freedom, justice, human rights, equality, and democracy. This is the North American DNA.”

Again, note how those murky new world citizen values are trotted out: “justice,” “equality,” “democracy.” These intentionally ill-defined descriptors are meant to replace the robust constitutional rights guaranteed to citizens of a sovereign United States.

Far from seeking to put an end to the inundation of the U.S. by massive human “migration” on a global scale, the Three Amigos declare that it must be codified and organized:

“Today, we affirm our joint commitment to safe, orderly, and humane migration under the Los Angeles Declaration and other relevant multilateral frameworks. This includes assisting host communities and promoting migrant and refugee integration; providing protection to refugees, asylum seekers, and vulnerable migrants; strengthening asylum capacity in the region; expanding and promoting regular pathways for migration and protection; addressing the root causes and impacts of irregular migration and forced displacement; and collaborating to counter xenophobia and discrimination against migrants and refugees.”

This is how a nation is lost. Judging by their written and verbal statements, it is impossible not to conclude that that is exactly what the “North American Leaders” have in mind.