What threatens America's national interests and security in 2022?

The 2022 Annual Threat Assessment of the US Intelligence Community (IC) is a cornucopia of bad actors and their dangerous intentions threatening America’s national interests and security. Each year the Office of the Director of National Intelligence (ODNI) publishes an unclassified, broad-brush evaluation of worldwide threats that pose serious consequences if the national leadership does not take them seriously. Of the manifest dangers the US faces, the following are three for all Americans to note.

First, the list of global competitor threats to the US is in the correct order. It is encouraging that the IC puts as number one in its list of perils, China. The Chinese Communist Party (CCP) is not the number one “pacing challenge” as the US Department of Defense euphemistically refers to the People’s Republic of China (PRC). China is a threat, not a “challenge” – economically and militarily – in space and the cyberworld, followed by Russia, Iran, and North Korea. Threat characteristics making the People’s Republic of China the premier global adversary are growing in significance. “Beijing is increasingly combining growing military power with its economic, technological, and diplomatic clout to strengthen CCP rule, secure what it views as its sovereign territory and regional preeminence, and pursue global influence,” is the way the threat assessment put it.

Militarily the CCP’s increasing number of nuclear warheads and the missiles to deliver those warheads should be worrisome. Additionally, “In 2020, the PLARF fielded its first operational hypersonic weapons system, the DF-17 hypersonic glide vehicle-capable medium-range ballistic missile (MRBM), which could challenge US missile defense systems,” the ODNI warned. After the IC assessment was published, there was more disturbing evidence of the PRC’s strategic threat in the Indo-Pacific region. A leaked secret document exposed a deal between the Solomon Islands and Beijing to open the islands’ harbors and ports to Chinese ground and naval forces. “This is deeply problematic for the United States and a real cause of concern for our allies and partners,” according to The New York Times quoting Charles Edel, holder of the Australia chair at the Center for Strategic and International Studies.

Russia, as the number two threat is currently throwing a horrendous and deadly geopolitical tantrum with its unprovoked invasion of Ukraine, killing multitudes of innocent civilians. The Kremlin has shown itself to be an immediate and existential threat to the US and NATO and its European and Eurasian neighbors.

Regarding Iran, the assessment explains, “Iran will Threaten US persons directly and via proxy attacks, particularly in the Middle East. Iran also remains committed to developing networks inside the United States – an objective it has pursued for more than a decade.” In addition, according to the ODNI, “Iran’s ballistic missile programs, which include the largest inventory of ballistic missiles in the region, continue to pose a threat to countries across the Middle East.” More troubling still, reports from the ongoing Iran nuclear talks in Vienna reveal the latest terms and conditions of a potential agreement do not include Iran’s ballistic missile program. 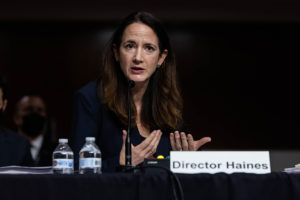 Lastly, a significant threat to the United States to notice is global transnational criminal organizations (TOCs). TOCs “pose a direct threat to the United States through human trafficking, the production and trafficking of lethal illicit drugs, cybercrime, and financial crimes and money laundering eroding the integrity of the international financial system,” according to the IC analysis.

And how does this wave of crime wash into the US? Clearly, “a growing number of people from around world see transiting Mexico as the way to reach the United States,” says the IC. The porous US border is a six-lane highway for illegal drugs, terrorists, and financial crime. This threat can be laid right in the lap of the Biden immigration team and the Secretary of Homeland Security. They have proven themselves utterly inept or unwilling to keep Americans safe from illegal aliens, drugs, terrorists, and criminals with unfettered access to US communities.

The IC’s unclassified annual threat assessment is not a detailed prediction of where and how the US will be attacked. However, it is useful in identifying what the national security leadership should be watching. Let’s hope they do.