It seems American voters want to probe the violent protests of 2020 more than the Jan. 6 Capitol “insurrection.”

While House Speaker Nancy Pelosi (D-CA) is busy putting together a committee to probe the Jan. 6 Capitol “insurrection,” a recent Rasmussen poll revealed that a majority of Americans believe Congress should be investigating the 2020 Antifa and Black Lives Matter (BLM) riots. According to the survey, conducted in conjunction with the National Police Association (NPA), “66% of Likely U.S. Voters think Congress should investigate last year’s violent protests, in which more than 2,000 police officers suffered injuries in the line of duty.”

To put things into perspective, only one person was killed at the Jan. 6 Capitol incident – a female Trump supporter who was shot by police – and the property suffered a relatively small amount of damage. That wasn’t the case with the nationwide rioting of 2020. The Major Cities Chiefs Association released a study of 68 cities in October. It found that there “were at least 574 protests that involved acts of violence, including assaults on police officers, looting and arson.”

The Rasmussen poll also revealed that:

“The number of voters who want Congress to investigate last year’s violent protests is higher than the 49% who say they support House Speaker Nancy Pelosi’s select committee investigation of the January 6 Capitol riot. Forty-two percent (42%) say they don’t support the January 6 investigation.” 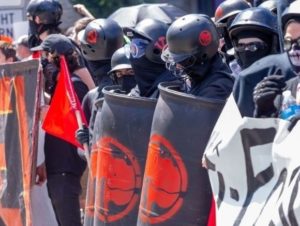 Belief that the 2020 riots should be investigated doesn’t seem to hinge on race or political affiliation, as 67% of whites, 66% of Hispanics, and 64% of blacks favor the probe, as do 75% of Republicans, 60% of Democrats, and 63% of independent voters. The poll also revealed the participants’ dissatisfaction with how officials handled their cities during the so-called peaceful protests. While dozens of protesters from Jan. 6 are being held in federal custody under dismal conditions, those who looted and destroyed countless businesses and committed acts of violence on law enforcement and civilians over the past year are mostly roaming around free. Those questioned in the survey believed that the failure of politicians to prosecute “quality of life” offenses increased crime: 70% of Hispanic and 59% of black respondents agreed, as did 77% of Republicans, 60% of Democrats, and 65% of unaffiliated voters.

The National Police Association (NPA) released a statement after the results of the poll published, explaining that:

“When the mayors of cities in which violent riots took place in 2020 refused to let police immediately stop the crimes taking place, it sent a message to violent criminals across the nation that crimes will be allowed and criminals won’t be touched. For the last year violent crimes have increased nationally and the lack of support from politicians has resulted in the number of police officers declining into a short staffing recruitment and retention crisis.”

“The National Police Association calls upon Congress to launch a bi-partisan investigation of the 574 violent riots in 2020 to include investigating the looting, damage to property, attacks on police officers and failure to prosecute the offenders. The goal of the investigation should be to determine how such a complete failure to protect the public can be prevented from happening again and outline what steps to take to regain the police staffing, criminal prosecutions and incarcerations necessary to restore peace, safety and justice.”

The Rasmussen poll also revealed that a whopping 76% of voters believe that young people should not be taught to resist or flee from police but should be educated on complying with law enforcement. Other findings from the survey include: