Is the new 2022 National Security Strategy just a rehash of the failed Biden doctrine?

On October 12, the Biden administration released its 2022 version of the National Security Strategy (NSS). In some areas, the document is an improvement over the 2021 attempt to chart a national security course. However, the paper conflates near-term hostile activities and intentions from contemporary enemies with long-term aspirations for a kinder, gentler world where everyone drives electric vehicles. The national security team cannot help itself. The NSS is more of a rehash of what could be called the Biden doctrine expressed in his recent UN speech. So, if you are looking for some new insights on the part of the US government, you will be disappointed. There are notable exceptions, however; the report includes an encouraging recognition of the increasing threat represented by the People’s Republic of China (PRC).

The NSS paints a convincing picture of China as more than a “pacing challenge” both economically and militarily. “The PRC is the only competitor with both the intent to reshape the international order and, increasingly, the economic, diplomatic, military, and technological power to do it,” the narrative states. But then the text goes on regarding Taiwan, “We oppose any unilateral changes to the status quo from either side, and do not support Taiwan independence.” What happened to “strategic ambiguity” or Biden’s assertion the US will defend Taiwan? It’s confusing and the rest of the NSS provides no more clarity.

As is often the case with broadly sweeping US government documents, the NSS has something for everyone but little intense focus on any one thing. The possible exception is diversity and inclusion, which seems to impact every conceivable aspect of US national security. As Military Times explained, the NSS outlined:

“… plans for strengthening alliances worldwide while maintaining a strong American military ‘by promoting diversity and inclusion.’ The strategy also includes a commitment to strengthening the US nuclear arsenal at a time when Russian President Vladimir Putin has threatened to use nukes in Ukraine and as the Pentagon warns of China’s growing arsenal of the destructive bombs.” 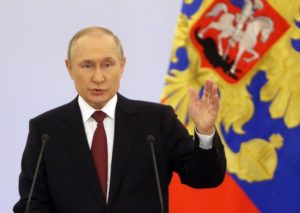 In this opening paragraph, the article identified the critical failing of the document – national security non-sequiturs. There is no sense of proportion regarding threat significance. The subject of diversity seems to be a seminally crucial national security issue to the Biden administration. The average American reading the NSS might get the idea that if the US just solves climate change and diversity problems, the Chinese Communist Party (CCP), Russia’s President Putin, North Korea, and Iran will be the best US friends forever. This is obvious hyperbole, but the amount of content allotted to nuclear issues, compared with the weather, and having a diverse military population, would lead the reader to conclude protecting Americans from an atomic weapons attack from adversaries comes in a distant third.

When it does look at the importance of nuclear security, the NSS is encouraging. “Nuclear deterrence remains a top priority for the Nation and foundational to integrated deterrence. A safe, secure, and effective nuclear force undergirds our defense priorities by deterring strategic attacks, assuring allies and partners, and allowing us to achieve our objectives if deterrence fails,” the strategy explains. A call-out box is devoted to “Integrated Deterrence,” arguably a concept critical to US national security. By comparison, the emphasis on integrated deterrence is a significant improvement over the 2021 Interim National Security Strategy Guidance. But other crucial responsibilities for securing the nation continue to disappoint. In one highlighted section titled “Combatting Transnational Organized Crime,” there is not one word about securing America’s southern border. A case can be made that the US is most vulnerable to transnational organized crime from the cartels who move killer drugs more freely into the US, engage in human trafficking at a rate not previously experienced, and support the entry into the US of would-be terrorists. And the Mexican cartels are emboldened to engage in this lawlessness thanks to the lax Biden border policies. The closest the NSS comes to addressing border security is: “We will pursue these collaborative efforts while ensuring a fundamentally fair, orderly, and humane approach to migration management that bolster[s] border security and protects our nation.” This statement is nothing more than an invitation to transnational criminals to keep up the assault on the US borders.

Overall, the 2022 NSS is a better declaration of what is of national security importance than the earlier version. However, Americans would be more confident in the Biden administration if it spent less time on the “rainbows and unicorns” issues of climate change, diversity, “a prosperous world,” and “an inclusive world” – issues having little to do with defending US citizens. “The national security strategy also recognizes that the climate crisis is the greatest of all the shared threats that we face without immediate global action during this decisive decade,” National Security Advisor Jake Sullivan told a Georgetown University audience. Try telling that to Americans who just paid for groceries or filled their gas tank.