Want to Talk National Security Threats? How About $22T in Debt?

The debt crisis is just getting worse.

It has been an interesting month for the nation’s fiscal picture. The national debt recently topped $22 trillion, the Congressional Budget Office (CBO) warned that the government will run out of cash to pay the bills by the fall, and the Federal Reserve sounded the alarm about “unsustainable” debt levels. Indeed, you’re not a political junkie if you don’t look forward to this time of the year!

Of course, these events also mean that politicians will grandstand and feign outrage over the treatment of the public purse. Both sides will quarrel about the debt limit – seemingly swapping positions when they switch power – but it will end the same way it always does: The Rs and Ds will make worthless concessions, they will raise the debt ceiling, and the country will go deeper into debt.

Yet, despite the years of doom and gloom prognostications, hardly anyone is batting an eyelash – except the handful of under-the-radar Republicans trying to take the issue seriously.

But will anything get done this time around? The hopeless romantic will shout to the heavens that the budget will be balanced in a decade. The cynic from those old crime noir novels will say that it’s about as likely as the Washington Nationals advancing beyond the National League Division Series (NLDS).

Representative Andy Biggs (R-AZ) introduced H.R. 149 that declares the national debt a security threat. Because the country “is racing towards a fiscal cliff,” Biggs is demanding Congress implement several measures to solve this financial quagmire. Some of the solutions involve restoring “regular order” to the appropriations process, imposing federal spending cuts, balancing the budget, and officially addressing the fiscal crisis that lays ahead.

Ultimately, the bill separates the hawks from the doves on Capitol Hill.

So far, it has 37 co-sponsors, and Biggs is also partnering with Senator David Perdue (R-GA) to submit a similar resolution in the upper chamber. Perdue told Fox News:

“The single greatest threat to our national security is our national debt, and it’s time Washington comes to grips with that reality. This month, our national debt topped $22 trillion. This news should have sounded alarms throughout Washington, but bureaucrats and career politicians didn’t even blink an eye.”

In the time it took for Sen. Perdue to make that statement, the national debt climbed $200,000.

Creature from the Black Lagoon

America’s public purse has been abused, exploited, raped, pillaged, and bankrupted by The Swamp creatures. While one side of the aisle is at least honest about turning the government into a delinquent, the opposing force spends time in front of the camera handwringing over the state abandoning any semblance of fiscal responsibility. Every four years, presidential hopefuls make vague promises of returning to financial sanity, only to allow the inmates to run the asylum and further bleed red ink with no end in sight.

“Only one thing to it: a strong stomach. The guts to gladhand a man you’re going to stab in the back; pledge allegiance to principles you stomp on every day; righteously denounce some despot in the press and sell him arms under the table. The talent to whip up the voters’ worst passions while you seem to call on their highest instincts, and the sense to stay wrapped in the flag. That’s politics: I’ll take the simple life.” 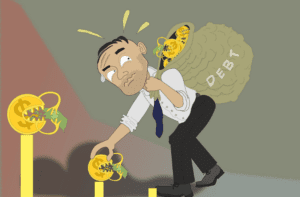 Even though the latest record happened under his watch, it is tough to fault President Donald Trump for the soaring debt because he never made it a central issue to his 2016 campaign, only making vague references to the ocean of IOUs. But you can blame the rest of the donkeys and elephants, as well as the voters, for allowing this to grow until it has its own gravitational force. And then there’s the often ignored $200 trillion in future liabilities and expenditures, which will only grow as the government swells into a monster that promises more entitlements.

Only the government can receive trillions of dollars in revenues and still post deficits and dig itself deeper into debt every single year. Indeed, Republicans double the debt, Democrats triple the debt, and the American people pay the price. That’s life in Washington these days – it’s the stuff dreams are made of.