Top Dems Bow to Immigration Extremists, but at What Cost?

Forcing the Democrat hopefuls to toe the progressive open-borders line has made it that much harder to champion agendas of their own.

Voting is about to kick off in Iowa and top-tier presidential candidates in the Democratic Party are being forced to publicly defend illegal aliens who commit other crimes while residing in this nation. If you were unclear as to who is calling the shots in this dark blue primary pageant, the latest general-election progressive sabotage of their own candidates should put all doubts to rest. Even after spending most of 2019 bowing before leftist party orthodoxy, Dem White House aspirants are still being forced to toe the line, making it that much harder to put forth and champion their own unique agendas.

Bernie on the Floor

Speaking Jan. 20 at an event hosted by radical media outlet Vice called “The 2020 Iowa Brown & Black Democratic Presidential Forum,” Sen. Bernie Sanders (I-VT), the favorite in the Hawkeye State leading up to the Feb. 3 caucuses, hemmed and hawed about the potential consequences of his vow to decree a total moratorium on deportations of illegal aliens upon becoming president. “If someone has been convicted of a terrible, terrible crime, that might be an exception to the rule,” Sanders stated, The Washington Post’s Dave Weigel reported, before quickly adding that “a moratorium on 99% of deportations is nothing to sniff at, and I think the undocumented community would be very proud of that.”

Amazingly, one of the tog dogs in the 2020 Dem field timidly suggested that he just might maybe, possibly, allow the most violent and vicious of illegal aliens to be deported. Even more remarkable is what followed this statement. Did he try to explain his stunning indecision on the matter to potential voters concerned about law, order, and their own personal safety? No, he instead attempted to assuage the hurt feelings of radical pro-immigration forces in his own party who would be outraged even by this crumb of a gesture.

It was a picture of abject cowardice that is bound to hurt Sanders if he does win the nomination and has to face an incumbent President Trump in the summer. In 2016, as he was gamely challenging Hillary Clinton, Sanders objected to “open borders” immigration policies as a spigot for an endless supply of cheap labor for “Koch Brothers” Republicans. Now, just four years later, he has completely backpedaled from his previous position to the point that he is not even sure he would allow the deportation of illegals who commit rape, murder, and other horrible crimes.

Biden Steps In It Again

Not to be outdone, former vice president Joe Biden, the ostensible moderate titan in this race, was quick to shuffle out his own pandering comments to the pro-immigration extremists in his party. At the same Vice, forum Biden promised that, as president, he would fire U.S. Immigration and Customs Enforcement agents who arrest and deport illegals convicted of non-felony crimes. That’s basic catnip for Dem progressives, but the gaffe-prone Biden decided to get specific. “You change the culture by saying you are going to get fired,” he said. “You are fired if, in fact, you do that. You only arrest for the purpose of dealing with a felony that’s committed, and I don’t count drunk driving as a felony.” 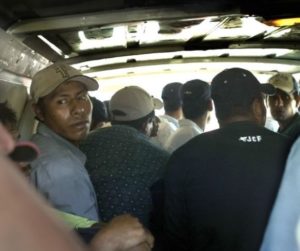 By bringing drunk driving into the conversation, Biden opened himself up to withering future Republican criticism over the preponderance of reports of illegal aliens behind the wheel killing American citizens. On Dec. 29, 2018 an illegal alien veered into oncoming traffic and killed 22-year-old Tennessean Pierce Corcoran. The story made national headlines in conservative media circles while, predictably, being largely ignored by big-box establishment outlets. It was a major story for months in Knoxville.

It really doesn’t matter whether Corcoran’s killer was drunk at the time (in fact he was not). By bringing up the specter of illegals and deadly road incidents, Biden was handing an ugly stick to Trump to batter him with in a potential general election showdown. It was unnecessary and it was done solely in an attempt to placate the vocal progressive core in his party.

Moderate Democrats surely must have keenly hoped that such leftist hijinks would be limited to the early stages of the campaign. With their remarks vigorously defending criminal illegals at this late a date, Sanders and Biden have shown it is not to be. The radical progressive anchor will be attached to the Democratic candidates right up to the moment one of them is selected to take on Trump. And there he will be, patiently waiting and armed with all the ammunition he will need for a brutal general election fight.