Texas Tirade: What Is the Democrats’ End Game?

These lone star props for the national party serve a much larger purpose than theatrics.

WASHINGTON, DC - JUNE 15: U.S. Speaker of the House Rep. Nancy Pelosi (D-CA) returns to the U.S. Capitol after a news conference with Democratic House members from Texas and Texas Democratic state legislators in front of the U.S. Capitol June 15, 2021 in Washington, DC. The Texas Democratic state House Representatives who staged a walk-out and killed the legislation, Senate Bill 7, and their State Senate counterparts were on Capitol Hill to meet with Democratic Senate and House leaders. (Photo by Alex Wong/Getty Images)

It must be nice work if you can get it. In fact, it sounds less like work and more like, say, the grand prize behind door number one on the classic game show The Price is Right: You have just won an all-expense-paid vacation in the lap of luxury! You’ll fly to the nation’s capital on a private jet and spend 30 days with the full red-carpet treatment from the Democrats’ majordomos in D.C. You will be wined and dined as if you’re heroes. But wait, that’s not all. You’ll also get more than $200 a day in walking-around money – courtesy of the taxpayers of Texas!

Spurred on by their national brethren calling the shots in Washington, the Democrat delegation from the Lone Star State has provided virtue-signaling left-wing media pundits with exactly what they want: a walkout, effectively a boycott of their employers. That would be the people of Texas – you know, the ones who elected them and pay their salaries. 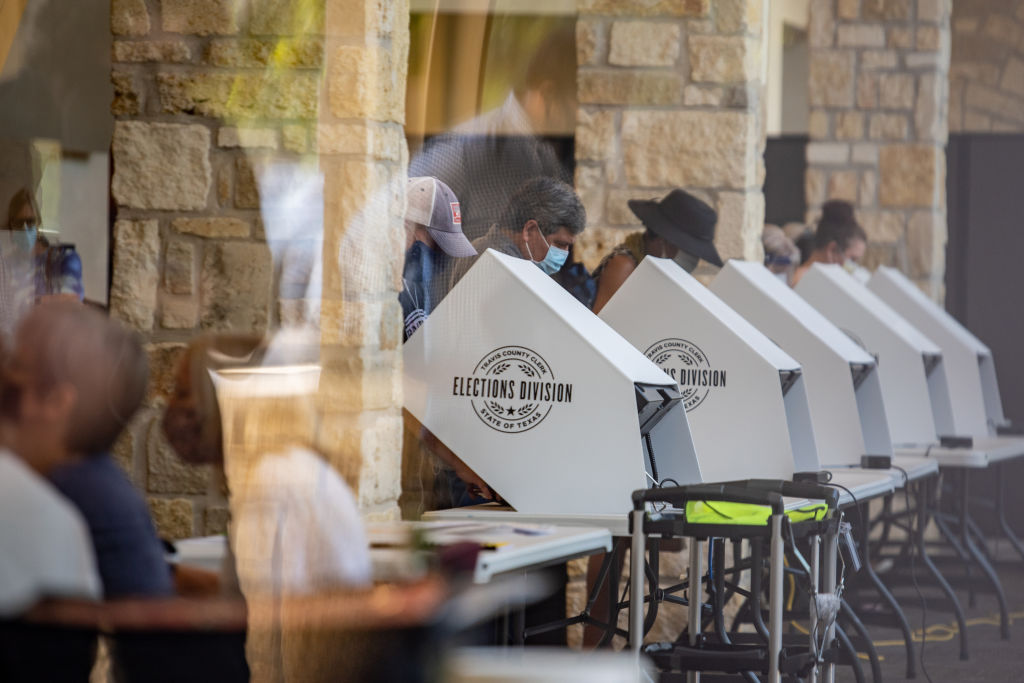 This staged spectacle provides the media a golden opportunity to turn up the bullhorn volume in condemning the chorus of state legislatures that reversed the pandemic-driven laws responsible for collapsing identification standards, producing an unheard-of number of mail-in ballots, and spiking turnout to record-shattering levels in the last election. The courts have refused to step in and override the states’ constitutional authority to select the time, place, and manner of federal elections on their home turf. So the left has now been reduced to theatrics. All in opposition to a state bill – which, given the sizable GOP majority in the Texas legislature, will ultimately become law – and in support of a federal bill (the notorious H.R. 1) that never will.

And it’s no wonder the so-called For the People Act is dead in the water, given its radical call for federalization of elections, including public campaign financing, nationally-mandated mail-in voting, a prohibition on voter ID requirements, and the institutionalization of ballot harvesting, which allows third parties to collect and deliver ballots.

Nevertheless, the walkout designed to prevent an inevitable vote on the state’s new election law places these 50 Texas Democrats prominently on the political radar screen. The self-proclaimed newsworthiness of it all serves as a built-in excuse to magnify the rank bigotry of Governor Greg Abbott and the GOP for having the audacity to pass stricter voting laws. In a journalistic climate that increasingly has the feel of permanence, where elite media gives every indication of taking its marching orders directly from the Democrats’ talking points, the political benefits from such a move are potentially far-reaching.

But most of all, this boycott-junket demonstrates that Texas is uniquely in the Democrats’ crosshairs. And why would it not be? With the big swing state prizes of Florida and Ohio seeming to slip from their grasp, evidenced by successive and decisive victories in both states by Donald Trump, the long-Republican Lone Star State has become their number one target for takeover. While Joe Biden lost there by six points, he improved on Hillary Clinton’s nine-point defeat in 2016. Together with changing demographics, which are rendering the state less white and more brown and black, Democrats clearly believe they can narrow the gap and put the state in their column in the not-too-distant future.

If they do, it would signal the death knell for the Republican Party. Democrats can already count on the virtual certainty of some 170 electoral votes – between California and the left coast, Illinois, New York, and most all of New England – just one hundred short of the total needed for victory. Flipping the 38 electoral votes of Texas means they would be set up to dominate presidential elections for as far as the eye can see.

Indeed, with Texas in tow, they could prevail comfortably even without adding new states such as D.C. and Puerto Rico, which you may recall as a fantastical item on their wish list after the 2020 election. But as with the Texas walkout, the unveiling of an explosively controversial initiative like expanding the Union for naked and transparent political advantage reveals a deep concern among Democrats over their long-term prospects.

Indeed, political parties holding the thinnest of majorities in Congress rarely go to bat for demonstrably unpopular causes. They don’t speak of far-reaching proposals such as federalizing elections or turning territories into states. And they don’t instruct their members to walk out on their jobs rather than face defeat – unless, facing the specter of rejection by the voters, they are left with no other choice.