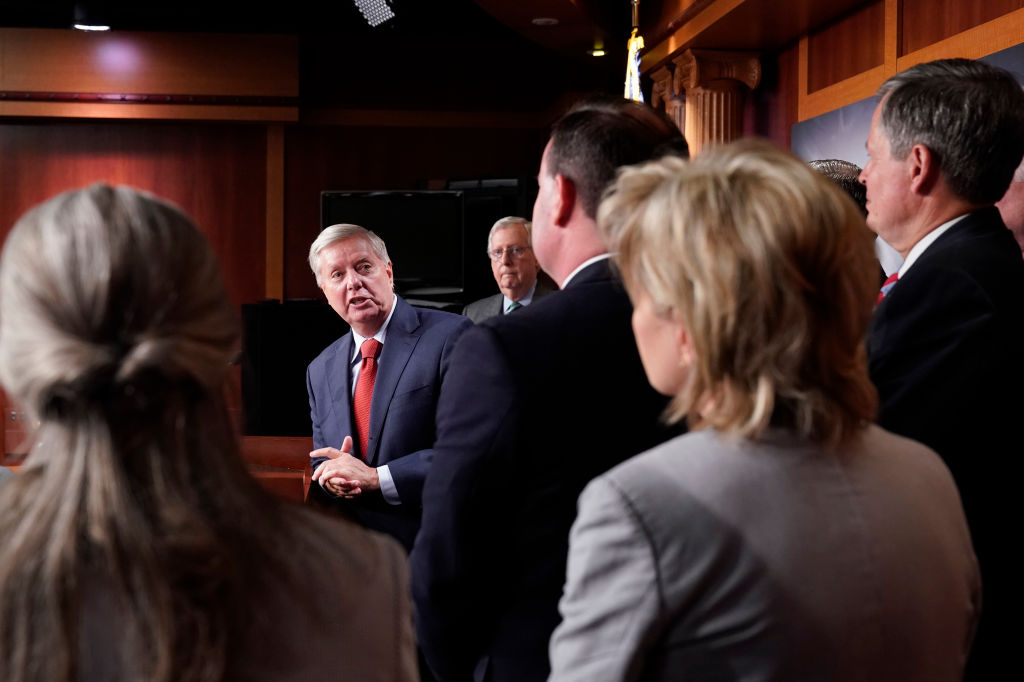 What's good for the Democrat goose may be ripe for the GOP gander.

WASHINGTON, DC - JUNE 17: Senator Lindsey Graham (R-SC) speaks about his opposition to S. 1, the "For The People Act" on June 17, 2021 in Washington, DC. Republican are calling the proposed legislation, which is intended to expand voting rights and reform campaign finance, a federal take over of elections and unconstitutional. (Photo by Joshua Roberts/Getty Images)

The act of Texas lawmakers vacating their state to avoid forming a quorum on voting legislation is not new; similar tactics have been used in the past to varying degrees of success. Yet the Fourth Estate fawning over the 50 plus Democrat politicos and their decision to abscond is an entirely new creature and one that may have set a quid pro quo precedent.

Senator Lindsey Graham (R-SC) was the first major politician to float the idea that if such a move is good for Democrats, it could be good for the GOP, too. Speaking on Fox News’ Sunday Morning Futures, Graham warned that he may be willing to escape from D.C. if it enables the GOP to put the kibosh on certain proposals within President Biden’s infrastructure package. Following recent remarks by Sen. Amy Klobuchar (D-MN), in which she suggested the bill could include reforms for “election infrastructure,” Graham complained the package is little more than “a liberal wish list” consisting of “all kinds of new social programs unrelated to infrastructure.”

He continued that if Democrats “put legalizing illegal immigrants in that bill, you’re going to have a complete run on the border … It would lead to an invasion of illegal immigrants if we put amnesty in the $3.5 trillion bill, so I’d do anything I could to stop that.”

When asked by host Maria Bartiromo whether he would follow the lead of the Texas House representatives and flee the scene to prevent the bill moving forward, the senator said, “Hell yeah, I would leave. I would use everything lawfully in my toolbox to prevent rampant inflation.”

“To my Republican colleagues, we may learn something from our Democratic friends in Texas when it comes to avoiding a $3.5 trillion tax and spend package: Leave town,” Graham said. “You’ve got to have a quorum to pass a bill in the Senate.”

But would such a bold action risk a political Krakatoa from the watching media?

Bailing out on the job – and how that appears to the folks back home who elected them – seems to be the least of the mounting worries for the Texas lawmakers. After charting a private plane (let’s ignore the hypocrisy on climate change for a moment) and surreptitiously organizing what has been described as a “clandestine” operation, the Democrats then snapped pictures of themselves with beer in a maskless flight that had all the hallmarks of a fun-packed road trip. The optics of this much-lauded event soon began to resemble a bad comedy as a reported five members of the group have now tested positive for COVID-19.

As the absconding politicians reveled in their newfound fame, they committed one of the most egregious sins imaginable for elected representatives: they began to believe their own press. Buoyed by talk of “bravery” and “dedication,” the representatives took to social media to fan the flames of their fresh status. Pictures of meals with the caption, “My first meal as a fugitive,” from Rep. Gene Wu, and other tone-deaf posts soon soured much of the public support the Texans may have had. But that did not stop the left-leaning media from continuing to paint an image of rebellious and brave defenders of democracy.

Lindsey Graham’s line in the sand appears to be amnesty for illegal immigrants. If this topic should find itself heading for the Senate floor, the South Carolina senator could well be headed for the hills. It would take a significant degree of both verbal and moral contortionism for the previously ebullient Fourth Estate to take Graham to task for his actions.

But perhaps the South Carolina senator is merely playing a game of chicken with the media, daring the partisan journalists to call him out on his threat in order to highlight the hypocrisy that is sure to follow. The distinct lack of press coverage for his statements so far suggests that this is a contest he will likely win.