Basically, everyone but Donald Trump is mad - and he's not too thrilled, either.

(Photo by Carlin Stiehl For The Boston Globe via Getty Images)

Editor’s Note: From the Back Forty is Liberty Nation’s longest running and most popular weekly column. Capturing the truth each week from heartlanders in flyover states, LN gives voice to the hard-working Americans otherwise ignored by the coastal elites.

Big Bird and Count Dracula were spotted thumbing a ride to Arizona, constituents in New Mexico are moving to Texas, and one former president receives a stinging rebuke from heartlanders. Well, yes, election week in the US disappointed and shocked conservatives and befuddled Democrats. But it did not silence the electorate or change a nation severely divided.

Two years ago, the election process in Arizona created chaos in the nation. One might think election officials would have ensured the balloting system would run smoothly – especially considering the Democratic candidate for governor is the current secretary of state. But unfortunately, that did not happen, and Arizona has yet to determine who might the new governor be.

Maricopa County Board of Supervisors Chairman Bill Gates attempted to explain on national television why vote tabulations in the county will carry over into next week. At the time of writing, 70% of the total vote had been reported, including 73% of the largest county, Maricopa. And Arizonans were angry and vocal. Like Sue Bergier, who went into suspicious mode: “Ridiculous and shifty, to say the least! And the lady in charge wants to be our governor! God give us strength.”

In the Valley of the Sun, Tony Teatsworth tossed around a new moniker for the Grand Canyon state, “My state is changing its name to Calizona.”

And Texas braced for another influx of fleeing Republican refugees. But Craig Bales in Wichita Falls, TX, went all in: “In other words, we will count till we get the vote count we want.”

Calls for Big Bird and Count Dracula to aid in the vote counting had folks laughing and crying. Rick Smith in Ohio observed that it “is totally ridiculous in this day and age” not to get the vote counted efficiently and securely. And another barb from the Buckeye State, by Brian Simpson, was a cry for oversight: “Here it goes, the cheat is on.”

The Land of Disenchantment

Conservatives in New Mexico are also in the throes of an election hangover. And instead of licking wounds and revamping strategy, most just want to move to Texas, hoping they can avoid Beto O’Rourke and live under fewer rules and regulations. Vic Walden in Aztec blamed the Albuquerque elites: “Because the Liberals in the I-25 corridor would vote Democrat if Hitler were the candidate. They don’t give a darn about competence or ability.” Brian Shay in Farmington posted: “I know why NM is ranked 50th in education: We don’t know how to count.” And in response, longtime friend Sandra Vigil simply stated, “Literally.” 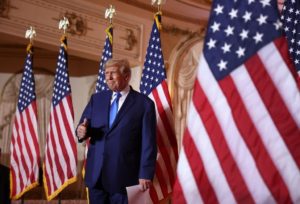 President Trump’s endorsements of MAGA candidates seemed to work quite well, alarming elite RINOs and terrifying Democrats. But, alas, Trump found himself in a fighting mood after calls by media pundits and weary Republicans celebrated Governor Ron DeSantis and elevated him to 2024 contender status. As number 45 snarked, “NewsCorp, which is Fox, the Wall Street Journal, and the no longer great New York Post (bring back Col!), is all in for Governor Ron DeSanctimonious, an average REPUBLICAN Governor with great Public Relations.” It was a stinger.

It may have sparked from an ad DeSantis put out during his campaign: a parody of the famous Paul Harvey speech, So God Made a Farmer. But in DeSantis’ version, God apparently went further: “On the eighth day God looked down on his creation and said ‘I need a protector.’ So God made a fighter.”

It’s a little much. But Trump took the heat from flyover folks who want less vitriol and more uniting in the Republican Party. In Hartwell, GA, Cheryl Hooker spoke her mind, “Sick and tired of Trump attacking the rising stars of the party. It is ridiculous.” And in Cedar Rapids, IA, Duane Peck rode the fence in describing the former leader of the free world’s outburst, “Trump’s ideas are great, but the name calling, etc., are way off base. Trump needs to sit down and be quiet.”

In Three Forks, MT, Michael Wolf also walked a fine line: “Both have done a good job; there’s no need to squabble amongst themselves. We have plenty of very real enemies hellbent on destroying us, and that would be a better focus: defeating them, not each other.”

And Trump himself is dangling the carrot while votes are still being counted. Earlier this week, he hinted, “Everybody, I promise you, in the very next, very, very, very short period of time, you’re going to be so happy,” Trump said, to everyone, that is, except Governor Ron DeSantis.