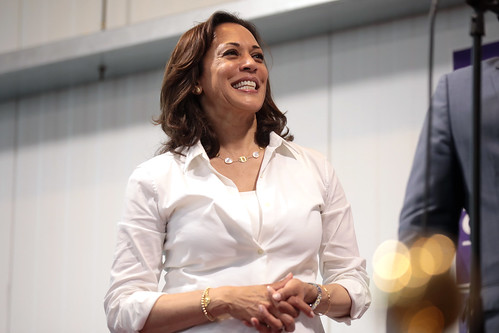 Dear Kamala Harris, Thank You for Your Service

An open letter from a rural American in appreciation of our new champion.

For years, you and other Democrats fought for people of color to have the right to vote, opposing racist restrictions like voter ID requirements. All the while, we rural poor have wondered: What about us? Sure, it’s great and all that the city people have their champions, but everyone always forgets about us flyover folk. Not you – not anymore, at least.

Though you’ve been an urbanite all your life, your firm grasp of country ways is simply astonishing – almost as impressive as your grasp of the English language. In your interview with Soledad O’Brien, you didn’t fail to comprehend what voter ID could mean for us backwoods bumpkins. “I don’t think that we should underestimate what that could mean,” you warned. “Because in some peoples’ minds, that means ,well, you’re going to have to Xerox or photocopy your ID to send it in to prove you are who you say you are. Well, there are a whole lot of people – especially people who live in rural communities – that there’s no Kinkos, there’s no Office Max, near them.”

What a sentence, and what an inspiration you are. You are right, by the way. I have lived in rural Arkansas for 36 years now, and I don’t think I’ve ever seen a Kinkos. I suspect there might be a Kinkos or two in what we hillbillies call the “big city” – like Little Rock, the most populous city in the state with just under 200,000 people, or the 89,000-resident Fayetteville, which happens to be number two headed down that list – but there sure isn’t a Kinkos near me. Of course, I don’t live in town. I’m out in the woods, and though there are a few little “cities” close by, they each have populations in the three-digit range. The nearest city of note is a town of about 35,000. And wouldn’t you know it, there’s an Office Max – and three Walmarts.

A quick search of the internet (have you heard of that yet? We’re just beginning to explore it out here in the sticks) shows that there are ten businesses in town that have print and copy services – even a Xerox – but, of course, that’s a 30-45-minute drive away. Who has time for that, outside the weekly grocery run?

That Office Max – and, of course, the three Walmart Supercenters – sell printers with all sorts of fancy stuff built right in, like copiers, faxes, and scanners. But there’s an awful lot of learnin’ to be done to set one of them up, never mind actually use it. And then, of course, the cost. I priced a three-in-one at Walmart just the other day, and it was almost $300. Who has that kind of money!?

Anyway, I just wanted to reach out and make sure you know your work has not gone unnoticed. I know I speak for rural folk from the Rockies to the Smokies when I say: Thank you, Madam Vice President, for coming to our aid in this most trying time – especially when, as I’m sure you already know, the vast majority of us voted against you and Biden to begin with. Can’t quite figure out why the Republicans would want to keep us from voting – even a redneck knows not to bite the hand that feeds him!

P.S. You know, the darndest thing just popped into my noggin: What if, come election time, I stop in at one of the handful of churches and community centers within a ten-minute drive of my house and ask them fellas in the parking lot holding those political signs how I can vote? I bet one of them could help.

P.P.S Okay, maybe signing off with “Sincerely” was a bit of a stretch.