The Trump Court – Not Done Yet!

Democrats are reeling from three big decisions, but the next one could be the granddaddy of them all.

The American Left has been having a national tantrum since a 6-3 landmark ruling handed down by the U.S. Supreme Court overturned Roe v. Wade. Without so much as taking a breath, The Trump Court then issued a significant victory for gun rights in New York State Rifle and Pistol Association v. Bruen and followed it up with wins for religious liberty in Kennedy v. Bremerton School District and for the fossil fuel industry in West Virginia v. EPA. Still smarting from rulings on abortion, gun rights, and religion, Democrats are nothing less than panicked by the prospect of the High Court taking up the issue of election disputes.

On Thursday, June 29, the court announced it would review the power of state legislatures in federal elections. A front-page headline in a prominent Washington, DC, newspaper demonstrates how rattled the Left is at this new case. Claiming democracy itself is under fire, these folks are not merely worried about what may be coming down the Supreme Court tracks in 2023 – they’re terrified.

Another Bombshell in the Making

Citing unnamed experts, the newspaper — which claims the mantle of democracy’s guardian — posited a conservative ruling, in this case, could “impact the presidential elections in 2024 and beyond.” However, what the left fears most is not The Trump Court but the U.S. Constitution itself. At issue is Article 1, Section 4, the Elections Clause reads in part, “The Times, Places and Manner of holding Elections for Senators and Representatives, shall be prescribed in each State by the Legislature thereof ….” 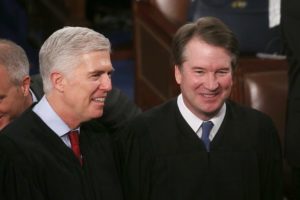 Taken at face value, this clause puts statewide election laws in the hands of local legislatures. But the left claims a literal reading of this clause is a mere conservative legal theory “giving state legislatures virtually unchecked power over federal elections,” warning that it could “erode basic tenets of American democracy.” The fear is that such a claim would give “immense power” to legislative bodies, leaving one to wonder why democracy is in such peril. After all, why would state legislatures which are elected by the people of the state pose such a threat to democracy?

Could it be Democrats are anxious because 30 states have Republican-led legislatures? Perhaps the Democrats fear legislation recently enacted by several states involving mail-in voting, redistricting, and voter qualifications. Lurking behind these recent state laws, they find – gasp – a conservative organization known as The Honest Elections Project, which is linked to – double gasp – former head of The Federalist Society, Leonard Leo. Leo is a guy the Left despises almost as much as they used to loathe Dick Cheney before they did a volte-face and fell in love with him for being Liz Cheney’s father.

In 2019 the U.S. Supreme Court issued a ruling regarding redistricting (often referred to as partisan gerrymandering) that tied the hands of federal courts in such disputes. State courts, said the Justices, should be the ones deciding such issues.

One does not have to read tea leaves to surmise where this Supreme Court is likely to fall when deciding the issue of election regulations. Undergirding the decision to overturn Roe is the judicial philosophy that the federal government cannot, and should not, run roughshod over the several states. However, state power is anathema to those on the Left who see a federal answer to every dilemma that ails the Republic. When it comes right down to it, what the left fears most is power in the hands of the people which The Trump Court appears bound and determined to restore.