The Coming Hunter Biden Investigation Has Democrats Ready for War

Political operatives are planning a scorched-earth assault on anyone who dares investigate the Bidens.

If there’s one thing Republican voters can rely on the GOP to do when it takes the reins in the House of Representatives next year, it is ramping up investigations into the Biden family syndicate. Obviously, Democrats also know it’s coming, and they are preparing fully to discredit, disrupt, deflect, and perhaps even obstruct those investigations by any and all means.

To achieve that, of course, they need proxies to avoid incriminating the White House. This time around, Democrats will not be able to rely on a friendly media to do that for them, as their favorite news outlets completely discredited themselves in 2020 and 2021 by claiming, with no evidence, that the Hunter Biden laptop story was a Russian folk tale.

Circling the Wagons Around Hunter Biden

At the helm of a recent meeting of Democrat operatives trying to coordinate a response to the looming investigations was Hollywood lawyer Kevin Morris, a man the New York Post has described as Hunter Biden’s “fixer.” Morris reportedly wants an aggressive approach to derailing the coming GOP probe into Joe Biden’s wheeling and dealing son. The attorney reportedly paid off a significant amount of delinquent taxes owed by Hunter Biden – to the tune of more than $2 million. But, though he is a high-dollar Democrat donor, Morris is no seasoned political insider. Enter David Brock, who attended the meeting at Morris’ home in California.

Brock, a staunch partisan, is known for his take-no-prisoners approach when it comes to fighting the Democratic Party’s critics. Converts are often the most zealous, and Brock was previously a conservative who became a dedicated Clintonista. He was once described by Neera Tanden, an adviser to Hillary Clinton’s 2016 presidential campaign, as “bats*** crazy” and a “nut bar.”

Various activist groups are planning to pile on once Republicans launch their Hunter Biden probe, Brock’s Facts First USA among them. Possible angles of attack include filing defamation lawsuits and searching the backgrounds of potential witnesses against the Bidens for anything that might throw doubt on their credibility. 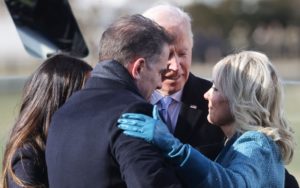 What is interesting, as Jonathan Turley pointed out – writing for the New York Post – is that a leading Democrat-aligned Washington newspaper was fed the story of this coordinated response. One would always assume that when political operatives are planning a counteroffensive to blunt the other side’s attacks over any given issue or event, they would do the planning in secret. Turley speculated that allowing the story of the California meeting to go public was intended as a warning shot for anyone who might be involved in the investigation. Proactive intimidation, one might even call it.

To say that Republicans have a lot of material to work with as they delve into the Biden family’s business dealings is an understatement at this point. Thus, we can expect that the attacks from Morris, Brock, and company will be mostly ad hominem in nature. Former President Donald Trump and his allies frequently used the term “witch hunt” to describe Democrats’ seemingly never-ending investigations of everything he did. That term is likely to be used quite a lot over the next two years. Still, if House Republicans stay the course and ignore the anger and outrage that will be directed at them, the American people might finally find out who “the big guy” – for whom Hunter Biden was going to hold 10% of a substantial payout from a Chinese-linked company – really is.