SAY WHAT? Kamala Just Says No to Trump Vaccine

The would-be vice president hates Trump so much that she apparently prefers catching COVID-19 to preventing it. 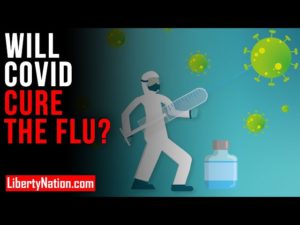 Tim Donner: So, as if we haven’t been through the wringer enough this year, President Donald Trump says no to a virtual debate, even though he is by most accounts well behind in the race and appears to be falling further behind. But one thing’s for sure: Trump had two chances to get in front of millions of people before the election. And now it’s down to one, if the scheduled third debate even goes forward on Oct. 22.

This latest episode occurred the day after Vice President Mike Pence and Senator Kamala Harris (D-CA) clashed in their one and only vice presidential debate. Their verbal joust has been thoroughly evaluated at this point, but the residue remains from two running mates more likely to ascend to the presidency than ever, given that Biden’s in a state of cognitive decline and Trump has been hit with COVID-19. And both of them came out swinging, with Harris condemning Trump in the starkest possible terms on his handling of the pandemic and Pence firing a broadside back at her.

Kamala Harris: The American people have witnessed what is the greatest failure of any presidential administration in the history of our country … and our plan is about what we need to do around a national strategy for contact tracing, for testing, for administration of the vaccine, and making sure that it will be free for all.

Mike Pence: Quite frankly, when I look at their plan that talks about advancing testing, creating new PPE, developing a vaccine, it looks a little bit like plagiarism, which is something Joe Biden knows a little bit about.

Tim: Pence was referring to Biden being forced out of the 1988 presidential race after revelations about him plagiarizing speeches and law school submissions. But listen to the exchange between the VP candidates, when Harris was asked if she would welcome a vaccine, which may well come before the end of the year.

Mike Pence: The fact that you continue to undermine public confidence in a vaccine, if the vaccine emerges during the Trump administration, I think is unconscionable. And, senator, I just ask you, stop playing politics with people’s lives.

Tim: Pence went on to re-emphasize the same issue about the Supreme Court that Joe Biden sidestepped in last week’s debate with Trump.

Mike Pence: Your party is actually openly advocating adding seats to the Supreme Court, which has had nine seats for 150 years, if you don’t get your way. This is a classic case of, if you can’t win by the rules, you’re going to change the rules.

Tim: Like Biden, Harris refused to answer whether she favors packing the court, but as the debate closed, the moderator, Susan Page, who had done a good job most of the night — unlike Chris Wallace at the presidential debate the week before — asked the question now being openly debated on the left, whether Trump would leave the White House if he loses, but refuses to accept defeat. And Pence put it right back in the face of Harris and her leftist colleagues.

Mike Pence: Senator, your party has spent the last three and a half years trying to overturn the results of the last election. It’s amazing when Joe Biden was vice president of the United States, the FBI actually spied on President Trump and my campaign … We’ve all seen the avalanche, what you put the country through for the better part of three years, until it was found there was no obstruction, no collusion, case closed. And then, Senator Harris, you and your colleagues in the Congress tried to impeach the president of the United States over a phone call.

Tim: And thus ended what was a commanding performance by Mike Pence. Clearly, far more effective than Trump’s first debate. Kamala Harris not so good, but then we should hardly be surprised. This was a woman whose personality turned people off as she bombed out in her own presidential campaign.

The question now is whether a VP debate ever really influences the outcome of any election. But if there ever was one, it might be this one, because health concerns about both presidential candidates means the possibility of either Kamala Harris or Mike Pence becoming president before the 2024 election seems more real than ever.

But the recovering president ignited yet another firestorm with a tweet saying he feels better than he has in 20 years — and this statement about COVID right after his release from Walter Reed hospital.

Tim: And then, of course, the elite Trump-hating media went nuts.

Various mainstream media reporters: Now we see this tweet, which is heartless. It is cruel … What does that mean, don’t be afraid of it? I mean, first of all, it’s a contagious disease that kills people. There’s nowhere to even begin … It’s just so horrible, so destructive to say, I feel better than I have in 20 years … His saying this is so disrespectful … The president says it’s no big deal. I mean, it’s outrageous … It’s disgraceful, Wolf. It’s absurd.

Tim: Bob Woodward, Jake Tapper, Wolf Blitzer among the commentators there. Meanwhile, Biden remained mostly in his basement but did appear on an NBC News town hall and answered the enduring question of whether he would be overrun by the growing socialist movement in his party.

Joe Biden: Do I look like a socialist? Look, I’m the guy that ran against the socialist member — I got in trouble, a little campaign, 20 something candidates, Joe Biden was too centrist, too moderate, too straightforward. That was Joe Biden. I have taken on the very people that, in fact, we’re worried about.