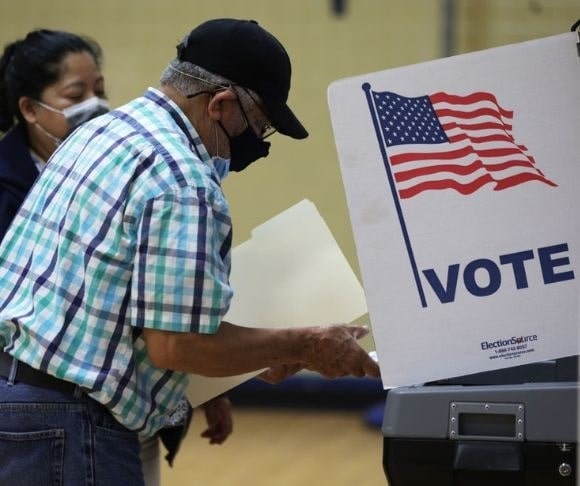 Democrats disconnected from the issues that matter most.

Democrats would love to believe that abortion, along with certain “social justice” hot-button issues, is set to galvanize their base and carry them through the November elections, but that’s not how the world works. A majority of midterm polls have been indicating for a while that momentum is with the GOP, and the most recent survey produced by Langer Research Associates for ABC News, released on September 25, brings home a harsh reality for the party currently in power: voters are concerned about things that affect their daily lives, rather than matters that have no direct impact on their present or future safety and prosperity. When it comes to the issues that concern them the most, Americans believe the Republican Party will better serve their interests.

If there is any good news for Democrats in the new poll, it is that respondents overwhelmingly rejected the Supreme Court’s decision to overturn Roe v. Wade, eliminating federal protection of access to abortion. Sixty-four percent of those surveyed oppose the ruling, while just 29% support it. Those percentages include everyone who “strongly” or “somewhat” opposed or supported the decision. Additionally, more respondents (50%) said the Republican Party wants too many restrictions on abortion, as opposed to 31% who said the Democratic Party supports too much access.

On a side note – but perhaps an important one – Langer Research might have loaded the question, so to speak. The exact wording put to survey respondents was: “Do you support or oppose the decision by the U.S. Supreme Court eliminating the constitutional right to have an abortion? Do you feel that way strongly or somewhat?” How might some have answered the question if abortion had not been framed as a “constitutional right,” which it is not and has never been? It’s hard to say for certain, but the percentages may have been different if no mention of constitutional rights had been made. Be that as it may, abortion did not figure prominently on a list of seven issues the survey-takers were asked to grade in terms of importance in the upcoming elections.

Voters’ Priorities According to Midterm Polls

Abortion registered as important with 62% of respondents, practically on a par with immigration (61%). Climate change was deemed important by 50%.

When asked which of the two main parties could be trusted to do a better job of handling each issue, voters chose Democrats (52%) over Republicans (32%) when it came to abortion. Regarding education and schools, Democrats also held an advantage, trusted more by 47%, in contrast to 41% who trusted Republicans. Curiously enough, the survey respondents gave Democrats a one-point advantage when it came to immigration (44% – 43%).

On inflation, the economy, and crime – three of the four issues that concerned voters the most – Republicans were well ahead:

The party trusted to do a better job handling…

It is often the case that people who spend their time interpreting voter surveys to perceive an advantage for one party or the other can be quite imaginative. In 2022, given the stakes, that practice could be even more prevalent in the reading of midterm polls. Additionally, most US polling organizations have a spotty record when it comes to predicting the outcomes of elections. What this does appear to show, however – as many previous surveys have – is that the traction Democrats hoped for in the wake of the Roe v. Wade reversal is just not there. Would the abortion debate figure more prominently if the economy was in decent shape? That is at least somewhat likely. When the average American is not alarmed by the cost of living or the danger of physical assault, his or her attention is drawn to other concerns. The 14-point advantage Republicans hold on the issue of crime is a 30-year record. This might explain Democrats’ recent attempts to distance themselves from the soft-on-crime efforts they have enthusiastically supported over the past three years with policies such as decriminalizing a range of offenses, cashless bail, defunding police departments, and the early release of offenders from prison.

It seems – once again – that Democrats hope they can motivate the American voter with emotional pleas rather than real solutions to real problems. That might have worked for them in 2020 when, after four years of constant demonization and endless investigations, Donald Trump was ejected from the White House. This year, two matters that directly impact the lifestyles and security – both physically and financially – of every voter are both trending rapidly in the wrong direction. By contrast, abortion – while a catalyst for much outrage on the far left – directly impacts only a minority of the electorate. In a perfect Democrat world, millions of Americans would storm the polling booths to reject Republicans’ stance on the issue. As midterm polls are showing, that world does not exist – but rising prices, shrinking 401Ks, inflation-ravaged savings, shootings, muggings, and car-jackings are all too real.