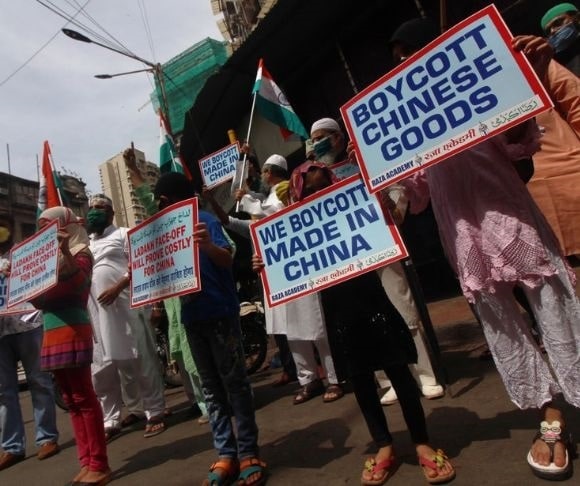 Why China and India Duke It Out on Their Common Border

In his 1914 poem “Mending Wall,” Robert Frost penned, “Good fences make good neighbors.” But when fences are impossible and property lines difficult to draw across the peaks of the Himalayan Mountains, border disputes are likely. And so it has been for decades with China and India. Most recently, on Dec. 9, Beijing and New Delhi soldiers on the border in the Tawang region [See CIA Map Courtesy of Business Insider] on the Yangtse plateau came to blows with sticks, rocks, fists, and no lack of unflattering epithets, one would suppose. 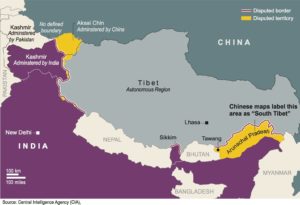 According to reports, the fight broke out when People’s Liberation Army [PLA] troops decided to overrun an outpost in the disputed area. Indian forces took exception, and the mêlée started. “China and India share a disputed 2,100-mile border, which has neither been settled on a map nor marked on its difficult mountainous and glacial terrain,” Ajai Shukla, a former Indian Army officer and strategic affairs analyst, wrote in The New York Times. When two nuclear powers clash over property rights on a common border, it’s never good, and it’s helpful to know how the fight got started.

China and India Conflict Has Its Roots in History

As is often the case in today’s turbulent geopolitical world, the genesis of the India-China dispute can be traced back to early in the 20th Century when British colonialism ruled the Indian continent. In his 2020 article “India and China: Behind The Conflict,” published in Foreign Policy in Focus, Conn Hallinan provided a historical perspective. He wrote:

“The ‘border’ in dispute is an arbitrary line drawn across terrain that doesn’t lend itself to clear boundaries…Henry McMahon [while serving a High Commissioner in Egypt], drew it to maximize British control of a region that was in play during the nineteenth-century ‘Great Game’ between England and Russia for control of Central Asia. Local concerns were irrelevant. The treaty was signed between Tibet and Britain in 1914. Although India accepts the 550-mile McMahon Line as the border between India and China, the Chinese have never recognized the boundary.”

China not adopting the McMahon line has been the “sticky wicket” in Sino-Indian relations since the border was drawn. The Tawang border area has strategic value for both India and China. With mountain peaks topping 18,500 feet high, the summits provide broad visibility over the Yangtse plateau and transportation access ways on both sides of the border. As a result, the Chinese have been busy building outposts and roads in the border area. “While China’s positions are lower on the plateau, it has invested more heavily than the Indian military in building new roads and other infrastructure over the past year [2020],” Australian Strategic Policy Institute analysts Nathan Ruser and Baani Grewal explained in The Strategist.

India took exception to the PLA building program. Ruser and Grewal pointed out that the Chinese have established forward operating bases providing greater access to the “de facto but unsettled India-China border, known as the Line of Actual Control [LAC].” Chinese troops are now bivouacked within 150 meters of the LAC with a newly constructed road allowing the opportunity to confront Indian forces. “It was the construction of this new road that enabled Chinese troops to surge upwards to Indian positions during the December 9 skirmish,” according to The Strategist article.

Major clashes between the Asian titans have not always been with sticks and stones. In 1962 the PLA invaded India with an estimated 80,000 troops. The Chinese forces overwhelmed the Indian army with devastating results for the New Delhi government losing 7,000 soldiers killed or taken prisoner. After roughly a month of fighting, the Chinese announced a ceasefire and withdrew from most of the territory it had invaded. The outcome was a stalemate, with neither side gaining nor losing territory.

Again in 2020, war broke out between India and China on the northeastern Himalayan border area along the LAC. The conflict lasted several weeks with numerous skirmishes, with both sides reporting no bullets were fired. Still, when the dust settled, India admitted 20 of its soldiers had been beaten to death. “How a clash that did not involve an exchange of fire could prove so lethal is unclear. There are reports that it was fought with rocks and clubs,” the BBC reported. Hostility erupted when India constructed a new road adjacent to the LAC, allowing rapid movement of troops in case of a conflict – which caused the conflict.

The December 9 brouhaha was just the latest, and there doesn’t seem to be a lasting solution. China and India are adamant in defending what each sees as its geographic entitlements. The good news for the rest of the world is that these nuclear-capable Asian powerhouses have chosen rocks, clubs, and fists as weapons of choice, for the time being.