Did the Biden administration miss the previous Putin warnings?

Recent media reports suggest US President Joe Biden only just noticed that Russian President Vladimir Putin threatened to use nuclear weapons. The US chief executive has invoked strong words like “Armageddon,” and suggested America has not seen this level of nuclear threat since “the Cuban missile crisis.” Regarding the fresh White House concern, the question is when did Putin’s repeated previous threats become more threatening? What does the US national security team know now it didn’t realize before? The cynic might believe Biden suddenly decided to voice his concern over Russia’s saber-rattling to divert attention from his abysmal showing in every other arena of governing.

In December last year, Putin told the world he was prepared to deploy intermediate nuclear missiles on Russia’s border with the rest of Europe. Few in the administration took serious notice. Remember, this was roughly two months before Kremlin forces executed their “special military operation,” the unprovoked February 24 invasion of Ukraine. However, this was by no means the only time the Russian president threatened nuclear war since his troops gathered at Ukraine’s border. Following the meeting of 40 nations in Germany to discuss how Europe, the US, and others would support Ukraine in its desperate fight to push the Russian invaders out, the Putin took an unexpected action.

In late February, Putin put Russia’s military on the highest state of nuclear alert. At the time “At the end of a recent press conference, President Biden was asked about Russia’s alert status and if there was any reason for Americans to be alarmed about a possible Russian nuclear attack. Biden gave a short one-word response: ‘No,'” Liberty Nation reported. The correct answer as events have unfolded in Ukraine was “yes,” Gordon Chang, a national security expert, said in a commentary in Newsweek. So, there are legitimate reasons to ask why Putin’s most recent threat to use tactical nuclear weapons prompted such a concerned public response from President Biden.

“First time since the Cuban Missile Crisis, we have a direct threat of the use [of a] nuclear weapon if, in fact, things continue down the path they are going,” Biden told an audience at a New York City fund-raiser. “I don’t think there’s any such thing as the ability to easily [use] a tactical nuclear weapon and not end up with Armageddon.” Biden continued. When listening to the US chief executive, the thought does cross your mind, is he building up a problem so when it fails to materialize, he can claim credit for averting a crisis? Others are not as confident of the Kremlin strong man’s intentions to attack Ukraine targets with nuclear-tipped missiles or bombs.

Will the Kremlin Use the Nukes? Probability Is Low 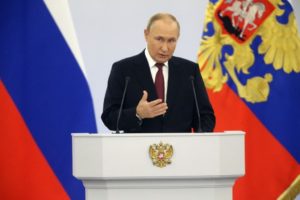 “I think the probability of it is pretty low, but you have to take it seriously because of what these weapons obviously of what the horrific applications and what it would mean to Ukraine and the world writ large… He’s brandished these weapons before or at least had his surrogates do it,” General Jack Keane, US Army retired, explained in a Fox News Sunday interview. Keane asked the rhetorical question what would motivate Putin to escalate to nukes. He knows such an action would bring NATO, US missiles, other weapons, and possibly troops into the conflict. The Kremlin forces in Ukraine would be destroyed. “He wants to win the war. If he uses a nuclear weapon, he guarantees he loses,” Keane concluded.

Biden’s own Department of Defense does not share the imminent threat of Moscow resorting to nuclear weapons. “As I’ve mentioned before, at this stage, we do not have any information that would cause us to change our strategic deterrence posture. And we don’t assess that President Putin has made a decision to use nuclear weapons at this time,” Brigadier General Pat Ryder, Defense Department press secretary, explained in an October 6 briefing to the Pentagon press corps. However, Ryder also reiterated that the US and the international community believe Putin’s nuclear saber-rattling “is reckless and irresponsible.”

Whenever an enemy with 5,977 nuclear warheads makes threats to use them, the US and its allies cannot dismiss such menacing rhetoric blithely. At the same time, the US must assess the likelihood of Russia resorting to the use of tactical nukes. The Biden national security team needs to be on the same page when it talks about what could be, in the president’s words, Armageddon. Terrifying Americans, when there is less than unanimity of opinion, is thoughtless and unnecessarily alarming.