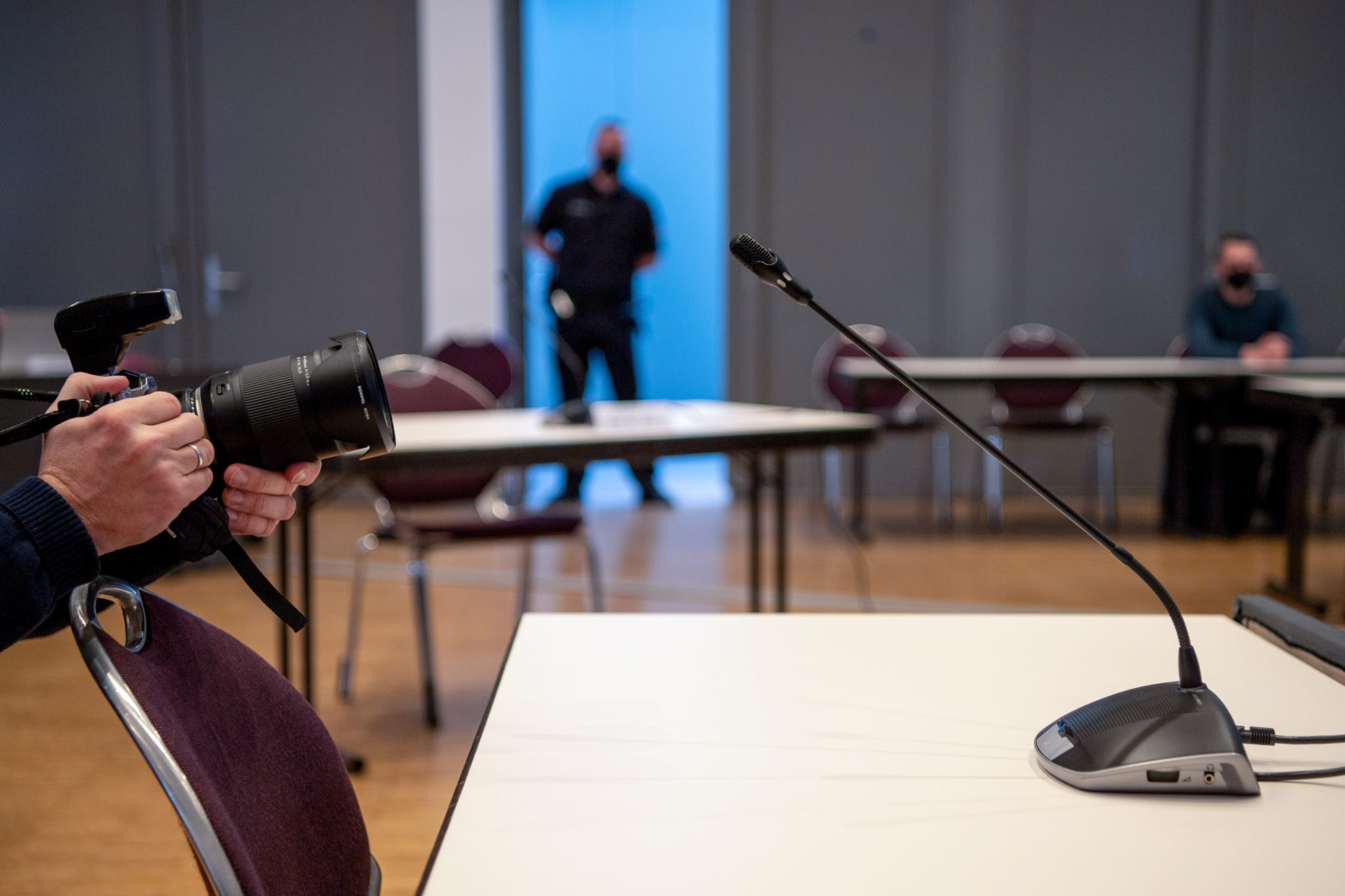 Media Cheering Firearms in Ukraine, But Still Anti-2A at Home

The left-wing press confuses itself over anti-gun narrative.

01 March 2022, Lower Saxony, Oldenburg: A microphone stands at the seat for the witnesses in the trial against ex-superiors of the convicted former nurse N. Högel in the courtroom in the Weser-Ems-Hallen, where the regional court has moved the trial due to lack of space. Because of the murder series superiors of the ex-nurse of the hospitals Oldenburg and Delmenhorst must answer before court. They are accused to varying degrees of manslaughter by omission or aiding and abetting. They are alleged to have failed to intervene to stop murders committed by Högel. Högel, who was convicted of 85 murders in 2019, will testify as a witness. Photo: Sina Schuldt/dpa (Photo by Sina Schuldt/picture alliance via Getty Images)

Americans across the political spectrum finally stand united on the right to keep and bear arms, just so long as they’re talking about Ukrainians. Does this mean the anti-gun media has seen the light? Of course not. While Second Amendment advocates point out the ideological inconsistency of the press championing the right to bear arms for Ukraine without recanting their claims that the same is terrible in the U.S., the few who respond come back with, “Oh, but it’s different. They’re being invaded.” Talk about not seeing the forest for the trees.

A Primer in Hypocrisy

For years, the people of Ukraine have been forbidden the right to keep and bear arms for self-defense. Rifles and shotguns for hunting could be obtained, if the police agreed to issue a permit, but handguns were banned entirely. Then Russia invaded, and the government decided that maybe folks ought to defend themselves, after all.

Let us admire the hypocrisy, for a moment, of the Ukrainian government: Okay, we’ll let you have rifles and shotguns for hunting, but no, you can’t own any handgun or carry a gun for self-defense. Oh, wait, we’re going to be invaded by a superior force? On second thought, sure, have all the guns you want – and any kind, in fact. For that matter, please do take up arms. We’ll even hand you a machine gun if you come ask for it – anything to put more armed bodies on the ground between Russian soldiers and the end of Ukraine as a sovereign state. The audacity required to deny the people the right to defend themselves for years, then beg them to save you is astounding.

However, two good things could come of this. For one, Russia is going to have a much harder time gobbling up Ukraine. For another, if there’s still a Ukraine left at the end of it all, there’s little chance of the government getting that genie back in the bottle. But there’s no point pretending this is some great tribute to human rights.

Everybody Loves an Underdog

The media, of course, lauded the move. A clip of an interview on CNN made the social media rounds last week, and the immediate response was a belief that CNN suddenly recognized the importance of the Second Amendment.

In the clip, Nina Khrushcheva, a professor of international affairs at New School University in New York, told the CNN anchor that Ukrainians were going to “fight like hell,” and that “if every Ukrainian takes a gun, Russians don’t have a prayer.” The Twittersphere, of course, erupted in a debate over whether this means the network is suddenly pro-gun. Another CNN story, this one from March 1, highlights the civilian volunteers preparing to fight in Kyiv.

But on the very day the Khrushcheva interview clip hit Twitter, CNN published a story titled, “Guns overtake car crashes as leading cause of US trauma-related deaths, study says.” The top half of the article focused on how an estimated 1.44 million years of potential life had been lost due to firearms deaths, a figure found by subtracting the age of people who died by bullet in 2017 from the “standard age of 80,” then adding up the differences. Why that made-up number is more relevant than the actual amount of lives lost is clear: sensationalism. That the majority of those deaths were suicides – meaning they almost certainly would still have happened, just through different methods – wasn’t mentioned until six paragraphs in.

CNN wasn’t alone in taking a supportive stance of arming Ukrainians, but from the anti-gun leftist press, that isn’t any more about loving liberty than the government’s actions were. It’s about hating Russia. Perhaps the best – and most extreme – example came from Salon. In 2015, the progressive outlet tried to debunk “The Myth of the Good Guy With a Gun.” But February 25, 2022, Salon urged “Quick, Send Ukraine More Guns!” Nothing quite highlights the one-dimensional thinking of the left like the replies to a post comparing two statements by Occupy Democrats. On February 24, 2022, the left-wing activist group closed a tweet reporting that Ukraine had handed out 10,000 machine guns to civilians with “RT IF YOU STAND WITH THE BRAVE UKRAINIAN PEOPLE!” In 2016, the message was: “No civilian needs an AR-15, regardless of whatever mental gymnastics you do. You are a very special breed of stupid.”

According to the left, though, we don’t need guns because we aren’t being invaded; Ukrainians need them because they are.

But what if Americans turned in their guns and then were invaded? How effective would the populace be at defending itself, even with government handing out firearms? For that matter, armed civilians are a major part of why this country doesn’t get invaded. About 32% of U.S. adults own firearms; that’s more than 80 million trigger fingers. What would-be dictator wants to face those odds? Now, what if Ukraine had America’s gun stats before Putin attacked? With a population of around 44 million, that same 32% turns the paltry one million or so armed citizens of reality into a much more intimidating 14 million. That’s nearly five times Russia’s entire military – active duty and reserves combined. Putin may be willing to push on, uncaring of the cost, now that he has committed to a course of action, but would he have invaded to begin with if he knew it meant facing those numbers?