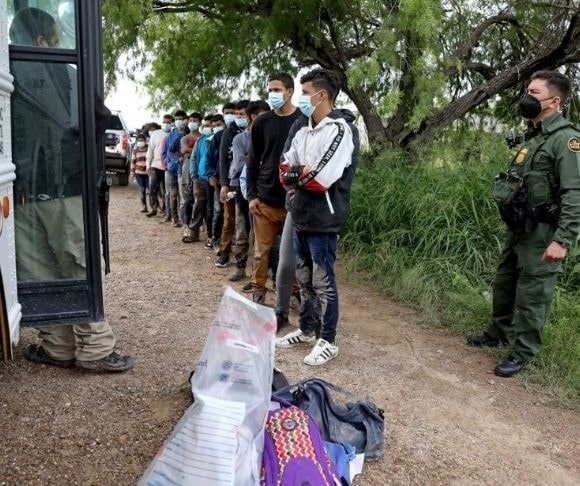 It appears private organizations are trying to aid President Joe Biden in his apparent quest to import as many illegal immigrants into the U.S. as possible. A Republican congressman recently spilled the beans on the matter during an appearance on Fox News. As the migrant crisis continues to worsen and Customs and Border Protection is stretched thin, these organizations seem to be trying to send the message that illegals will be given the red carpet treatment if they manage to make it over the border.

During an appearance on Fox News, Rep. Lance Gooden (R-TX) discussed how he discovered that private organizations were working to assist illegal immigrants after they crossed the border in violation of U.S. immigration law. He noted that a whistleblower reached out to his office to describe the operation:

“This whistleblower reached out to us from San Diego, and I couldn’t believe what I was hearing. And so I planned a trip. I went last week to San Diego to the Southern border, and what I found were nonprofits that were running secretive, abandoned hotels. The Four Points Sheraton SeaWorld, a Wyndham, a Ramada Inn. Those were just three of the ones that I visited. But these non-government organizations, these nonprofits were housing migrants for several days, I managed to get in the gates. I demanded entry once and was refused.”

The representative detailed his experience as he entered one of the areas where illegals were being taken. He said:

“I talked to guard into letting me in on another occasion. And when I was in there, I saw buses pulling up. Probably about 100 migrants, over an hour, got off of these buses. They were processed. They were welcomed by people with open arms that were there in the facility, tested for COVID. And then they were given packets. And this packet is what I received from the whistleblower a few weeks ago. And these packets detail how to go to the airport, how to get past TSA without any identification, how to enroll your children in schools and assimilate in whatever community you desire to go in.”

The lawmaker then recounted his conversations with TSA workers at the airport where migrants are boarding planes to be taken to various locations in the country. He noted how the agents told him “[they] get these migrants here” and that in some instances, “they’re being led onto planes before anyone else.” Unlike regular folks, these individuals are typically not required to provide identification to get on a plane, which could cause issues with terrorism as Gooden noted later in the conversation. “Imagine no identification,” he said. “What if there is a terrorist among them? That terrorist is then sitting on the plane and knows who the armed federal agent is that has visited with the pilot and says, hey, I’m on board and I’m armed.”

When asked which organizations are working to make it easier for illegals to reside in the U.S., he explained that “the biggest offenders in San Diego are the Catholic Charities and the Jewish Family Association.”

The Biden administration has been constantly criticized for causing the migrant crisis by essentially sending the message that those who travel to the border will be allowed to enter the United States. By reversing most of former President Donald Trump’s policies and working to provide amnesty to illegals already residing in the country, he created pull factors that inspired these individuals to make the dangerous journey to America.

However, stories such as these demonstrate that it is not just the president who has contributed to the problem – it is also private organizations and state governments seeking to make it easier for illegals to remain in the country without being caught by the authorities. These organizations also send the message that when these folks enter the country, they will be given aid and comfort by those who seek to push for open borders.

At this point, it appears those favoring illegals have the upper hand; the White House is clearly uninterested in stemming the flow of illegal immigrants into the U.S. The situation likely won’t change until Republicans manage to take back Congress and the White House.